We're reader-supported. When you buy through links on our site, we may earn an affiliate commission.
General

The United States Marine Corps (USMC) is an elite branch of the military that produces some of the most formidable warriors in the world. However, there is a running joke about this group of soldiers – they are crayon-eaters.

Why do people say that the Marines eat crayons? Where did this stereotyping come from?

“Marines eat crayons” is a derogatory phrase that suggests the low intelligence of the soldiers belonging to this division. Stemming from the interservice rivalries in the United States military, the statement insinuates that the Marines are less significant compared to other branches.

The United States Armed Forces consists of several branches, each with its own character and reputation.

For example, while Navy sailors are called squids, Air Force men get teased for being lazy. On the other hand, the Marines are often mocked for their education level.

The origins of “marines eat crayons” are unknown, but it continues to circulate in online forums as memes and shaggy dog stories over the years.

No. The Marines do not actually eat crayons. They have their trusty MREs or food rations where they get daily sustenance.

As far as interservice rivalries go, the Marine crayon-eating trope is definitely one of the most well-known. What started as an inside joke among the military branches became a hot topic in Quora posts and Reddit threads.

But then again, when the jest became a trending topic online, many in the food business tried to capitalize on the trend.

They tried to create crayons that the Marines could actually eat. One example is the Crayons Ready-to-Eat product made by a San Diego-based Marine veteran.

Made from chocolates that are sturdy enough to hold without being too dense to eat, Crayons Ready-to-Eat can still be used to color.

The company that made it produced a whole range of edible crayons with unique packaging similar to military MRE pouches.

The names are derogatory labels of all the military branches, including jarhead, squid, dogface, flyboy, puddle pirate, and space cadet.

If you ever see a Marine actually eating crayons, perhaps they are the edible ones explicitly made for a good laugh.

What Do People Mean When They Say Marines Eat Crayons?

It is a well-known fact that interservice rivalries are intense in the military. Being crayon-eaters is just one of the many insults hurled at the Marines in recent years.

The phrase does not pertain to the Marines eating crayons in the literal sense. It is an indirect slur on their perceived level of intelligence.

The Marines often get flack as the least educated branch of the military. Soldiers eating crayons means they are no better than toddlers who eat wax because they do not know any better.

Kiddos munching on non-food items is a rudimentary right of entry into toddlerhood. If you see a child chomping on crayons, it is definitely not the worst thing they can do.

Like toddlers who mindlessly eat crayons when they feel like it, the Marines who are crayon-eaters are those that are not mature or intellectual enough to be in service.

Some conjectures point out that this dumb stereotyping of the Marines stems from the alleged brainwashing within their ranks.

Like other military sectors, the Marines are a proud bunch. The bit of herd mentality in the group may be responsible for the typecast that they lack intelligence.

The Marines are also lenient on who they accept in their midst. You do not need a college degree and unique skills to get it.

The requirements for those who want to join are straightforward. You must be a United States citizen or a resident alien between 17 to 28 and with at least a high school diploma.

Aside from meeting the physical, mental, and moral standards, applicants must pass the Armed Services Vocational Aptitude Battery (ASVAB) test.

Other branches follow almost the same criteria, with a few additions. For instance,

Air Force men need to pass a specific exam to test if they can work with military aircraft before enlisting. The Air Force Officer Qualifying Test is comparable to the SAT before admission.

Of course, once you get into the Marine Corps, surviving will not be easy. You will definitely get whipped into shape during the intensive training.

Being out in the field also takes soldiers’ special kind of expertise.

The Marines’ mission is unique among the military branches. They protect naval bases, watch over U.S. embassies, and stand as a swift strike force to guard U.S. interests anywhere around the globe.

The Marines also pride themselves as an autonomous force. The branch has its own artillery, airpower, and logistic support in battle.

Every soldier is marked as a rifleman, from the infantry to the computer technicians.

Suffice to say, surviving the U.S. Marine Corps is no small task. Still, the group is stuck with the meathead stereotype.

They seemed to have accepted the slur with good grace over the years of being jested and poked fun of. 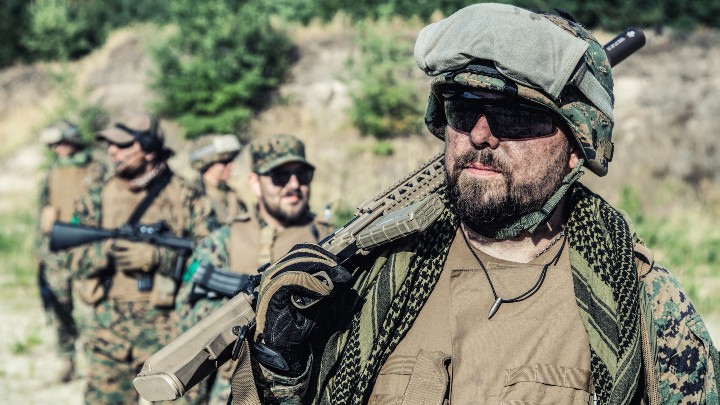 Where Did The Marines Eat Crayons Joke Come From?

It is difficult to pin down the origin of the Marines eating crayons trope. It proves to be a pretty recent one since the older soldiers did not know of its existence until the memes came popping in.

The crayon joke was not popular in the 1990s. The timeless derogatory terms such as jarhead and bullet sponges were prevalent back then.

Jarhead is a slur applied exclusively to Marines. The expression could be traced back to World War II when sailors referred to the Marines as such because of the uniform they sported.

The Marine Dress Blues has a high collar that presumably makes the wearer’s head looks like it is sticking out of a Mason jar.

The other possible reason is the high and tight buzz cut characteristic of the Marines. The style somewhat looks like a jar.

Either way, the Marines have learned to embrace the joke and not get upset over it.

Another slur for Marines is a bullet sponge. The term primarily refers to ground-based forces whose presence on the battlefield will inevitably end up getting shot or shot at.

Crayon-eater is probably the latest of all the inside jokes about the Marines. It became popular in 2017 online forums, inspiring memes left and right.

Many people were genuinely curious if the Marines literally eat crayons, albeit the non-toxic ones.

As the “marine eat crayons” joke flourishes, there have been several attempts to create edible crayons that Marines can actually munch on.

Most of these products were initiated by Marine veterans keen to make the joke a reality.

What Are Some Marines Eat Crayons Joke?

There are many jokes about the Marines-being-crayon-eaters trope.

One such example is when a Marine goes to a diner with his wife. The woman gestures at the children’s menu with crayons attached and tells her husband that they are his appetizers.

Another one is predicting that a baby will be a future Marine after getting caught munching on crayons.

There is also a jest on buying the perfect gift for a Marine easy – you give him a box of crayons.

Outside crayon eating, the Marines also get gag variations that allude to their lack of intelligence.

For example, a standing joke in the military is that the Marines are not allowed to learn to read or write until they reach a specific rank in the division.

Another is that when it comes to intelligence, the Marines are trained somewhat better than police horses, so they can help prevent problems during parades.

Of course, these insinuations are groundless. Most service members also understand the humor behind such statements and do not get insulted.

Before Joining the Military